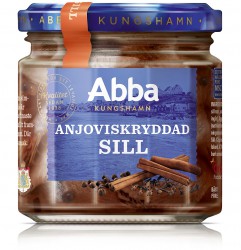 Herring in anchovy marinade – one of the most unusual tastes for fish lovers in Latvia. Herring fillet pieces are marinated in classical anchovy spices. Marinade with cinnamon, allspice and cloves. Herring in the jar is cut into nice pieces of fillet, without bones and skin.

Abba traditions for preparation of herring have preserved through centuries already since 1838. Abba herring is fished during the period from August to October, when herring has 16-18% of fat, which is a high source of natural Omega-3. Refined taste chosen by the Royals of Sweden.